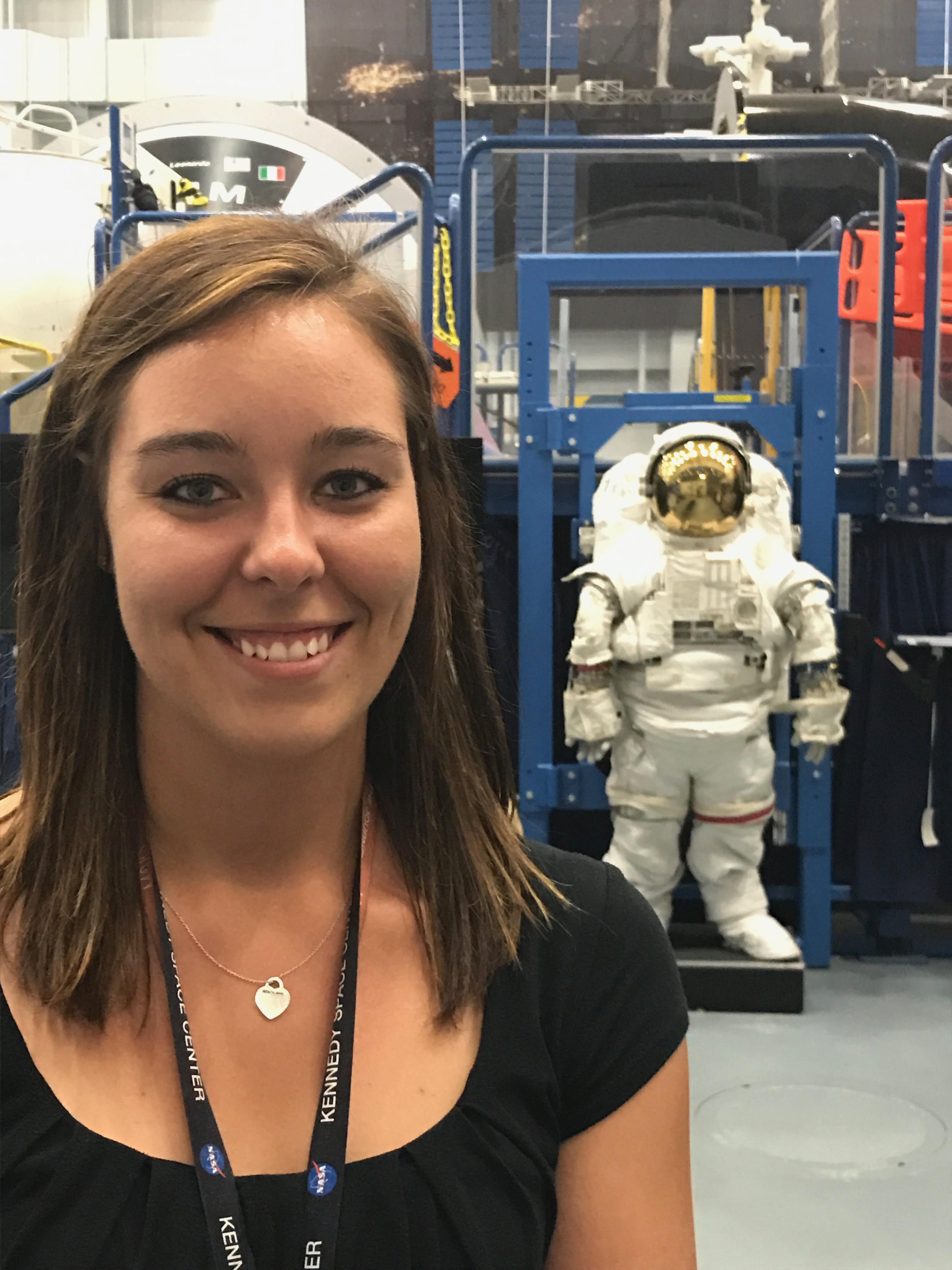 “When working with Veggie, we really do feel like the real Martians, just like the movie!” said scientist Anne Marie Campbell, referencing “The Martian,” a movie about an astronaut, played by Matt Damon, who is stranded on the red planet and grows plants to survive. Veggie (Vegetable Production System) is a deployable plant growth unit capable of producing salad-type crops used by the International Space Station (ISS) crew. “I am a payload integration engineer for ISS mission integration and operations at NASA’s Kennedy Space Center (KSC) in Florida,” Campbell said. “I started my career at KSC in 2015 … my job function is to manifest, test and prepare the payload (in other words, the investigation or experiment) for flight.” Campbell’s payloads include the Advanced Plant EXperiments (APEX), a series of studies on the effects of spaceflight on biological systems, and Veggie. Veggie provides lighting and nutrient delivery and uses the cabin environment for temperature control and as a source of carbon dioxide to promote growth. Campbell credits the grounded foundation of high-quality education, courtesy of Amherst EV Schools, with helping her reach accelerated and, one might say, out-of-this-world success at a young age. She graduated from Marion L. Steele High School in 2010. “My school experience consisted of making new friends, no matter what clique they were a part of, playing volleyball, throwing discus in track and field and, of course, school work! While in high school, I tutored a fifth-grade class for Mrs. Cindy Giacobbe, and I can honestly say that was one of my favorite memories.” Campbell attended college at Heidelberg University and worked at WIL Research Laboratories as a research biologist for a year after college. She is pursuing a Masters in Space Studies at the University of North Dakota as she trains astronauts and helps support the future of space exploration. “I get to travel to Houston to train crew members on how to execute the experiments, travel to (ISS)-related conferences throughout the US and give presentations about our hardware and science capabilities,” she said. “The directorate that I am a part of processes these experiments and payloads to be flown on commercial resupply missions, such as Orbital ATK on Wallops Island, Va., and SpaceX at KSC.”

“I really don’t have a special teacher that comes to mind, because there were several of them. They all pushed me to do the best I could.”

“I have given several talks to different classrooms and organizations in Ohio about my career and information about NASA’s space program,” Campbell said. In Orlando, she is a volleyball coach for a Mind Body and Soul (MBS) Training Club regional team. She also is the director and head coach of the MBS beach volleyball program.
Print this Page
Current as of 5/30/2020 5:21 pm
Copyright ©2020 Ohio School Boards Association. All rights reserved.