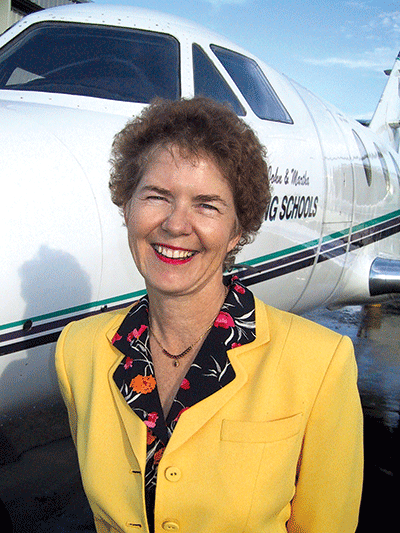 From blimps to jets, she flies it all

When you see a blimp over the Super Bowl, Martha Rockwood King might be flying it. However, acting as a backup pilot for the Fujifilm blimp is but a small bullet point on the résumé of this legendary aviator and instructor. King is the first and only woman to hold every category and class of Federal Aviation Administration (FAA) rating on her pilot certificate, as well as every flight and ground instructor certificate the FAA offers. She also is co-owner of the world’s leading aviation training video company, and flies everything from jets to piston airplanes to helicopters to light sport aircraft. She and her husband John claim to have taught more pilots via video instruction than anyone in the history of aviation. The daughter of Brig. Gen. Ralph and Modest Rockwood, she graduated as class valedictorian in 1963 from Fairborn City’s Fairborn High School, where she was a member of the National Honor Society and worked on the school’s newspaper and literary magazine. She went on to graduate from Indiana University with a bachelor’s degree in comparative literature. In the early 1970s, she and her husband began teaching pilots. Today, their San Diego-based King Schools Inc. is the world’s leading producer of aviation training videos and multimedia programs. Over nearly 40 years, King Schools has delivered millions of videotapes, CDs, DVDs and online courses to pilots and mechanics. King and her husband have won many awards. In 1996, they were named Aviation Educators of the Year by Professional Pilot magazine. In 2004, the Kings were awarded the status of Master Air Pilot in recognition of their worldwide contribution to general aviation by the prestigious Guild of Air Pilots and Air Navigators of London at a ceremony presided over by Britain’s Prince Andrew. In 2008, they were inducted into the International Aerospace Hall of Fame, joining the Wright Brothers and Charles Lindbergh. In 2003, the First Flight Centennial Commission honored Martha King as one of the 100 distinguished aviation heroes in the first century of flight. That honor put her among the likes of Buzz Aldrin, Chuck Yeager and John Glenn. She also was named one of the 100 Most Influential Women in Aviation by Women in Aviation International.

“Fairborn High School was a wonderful place for me to learn. I loved it. I especially remember how my Latin classes encouraged my exploration of how Western civilization developed, and gave me a rich vocabulary heritage. Fred Rufener, my geometry teacher, helped me develop the skills to make and defend a presentation — a skill that I still use to this day. I have been thankful to him ever since.”

“Through the video courses produced by my company, King Schools Inc., I have helped many thousands of Ohioans achieve the goal of learning to fly. I have returned to Ohio on many occasions to speak to pilot groups, especially regarding aviation safety.”
Print this Page
Current as of 4/15/2021 8:00 pm
Copyright ©2021 Ohio School Boards Association. All rights reserved.