Although small, these districts are providing their students a high-quality education. They have learned to make their size a strength in meeting their many challenges.

“Waynesfield-Goshen Local (Auglaize) has implemented two reductions in force and operates a program very close to state minimums,” said Superintendent J. Chris Pfister. “Yet we moved up 125 positions in the academic performance index state rankings and our students grew more than one year’s growth (value-added data).”

“In this part of the state, small school districts are extremely successful,” said William Reichert, superintendent at Jackson Center Local (Shelby). “We have good test scores, great graduation rates and our students go on to be productive members of society. Small schools are able to provide a personalized education that many parents want.”

Started in 1971, the Small School District Advisory Network represents the diversity of small school districts across Ohio, including rural, urban and suburban districts, and districts of differing property tax wealth. 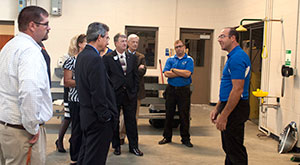 Fairlawn Local hosted the September SSDAN meeting, which included a presentation on how the district implemented a one-to-one iPad program. Participants toured the pre-K-12 school and visited a classroom, where students and the teacher showed innovative ways they are using the iPads to collaborate in class and beyond (see “Fairlawn Local shines during site visit” below).

“I love visiting the other districts in the network; to see the school in operation and what teachers are doing is powerful for me,” Pfister said. “I have been impressed with what I have seen and I am grateful for the demonstrations of how things work in the real world.”

Waynesfield-Goshen Local hosted a 2012 site visit. Board member David Pepple said he valued the chance to share the district’s successes.

“It gave us an opportunity to show off our school, staff and students, and all of the positive things going on in our district,” he said. “In addition, we were able to bring in two state legislators to that meeting to help them hear directly from SSDAN members about their issues and concerns.”

Those concerns range from a lack of resources and unfunded mandates to how best to meet the diverse needs of students when a district is operating at the state minimum.

“In a nutshell, we often do not have the resources to cover everything,” Reichert said. “Teachers and administration are often asked to wear multiple hats and be experts in a wide range of areas. Most of the time, there is no such thing as a curriculum coordinator, special education director, transportation director and so on. We cover classes quite often, occasionally drive bus routes, coach teams and so on.” 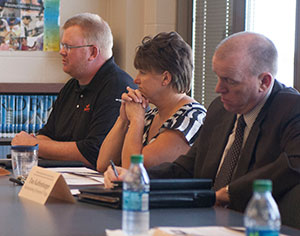 One example of this: Reichert drove a school bus route that morning and took a group of students to a field trip before attending the SSDAN meeting.

East Guernsey Local failed to pass levies in August and November, and its enrollment increased by 5% this year. Guernsey County is expected to “grow from 35,000 to 100,000 within five to 10 years because we’re in the hub of where Utica shale is,” said Dennis Doutt, a board member at East Guernsey Local and Mid-East Career and Technology Centers. “We have a lot of workers in our area; that’s where our influx of kids has come from.”

Despite these challenges, small school districts are not just getting by, they are thriving.

“Small school districts traditionally outperform larger districts and we do it for less money,” said Dr. Daniel R. Kaffenbarger, then-superintendent at Mechanicsburg EV and current superintendent at Madison-Champaign ESC. “Our biggest challenge is offering our students the same opportunities that are afforded students in more affluent districts.”

Smaller school districts can benefit from strong community connections, which can pay off in several ways.

“I have found that a strong sense of community is the great strength of a small district,” Pfister said. “A small school allows for a sense of caring for all; all adults know the students by name and involve the whole community in the school. No one is anonymous, and it is one for all and all for one … a strong sense of identity and culture of caring.”

Pepple described his school as the center of the community. “We have many people that continually support our school.”

“A local farmer nominated us for a Monsanto grant and we were awarded a $10,000 grant,” she said. The funds will be used to purchase equipment for high school science classes. 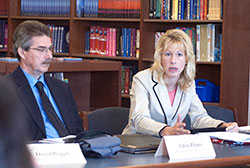 Having SSDAN to connect the districts has helped members share information and find new ways to address common concerns.

“The network has provided information on school safety, technology, departmentalization of elementary grades and the list goes on,” Kaffenbarger said. “It has been an important resource when considering how smaller districts are dealing with the massive amount of reforms coming from the legislature.”

“Quite often I have left meetings thinking, ‘What a unique way to approach that; I wonder why we didn’t think of that before?’” Pfister said. “That is the power of the SSDAN group, a group of similar districts with common interests. I see SSDAN as a significant contributor to our focus on continuous improvement. We make a conscious effort to learn new, more effective ways of doing things.”

“It’s good for us to go out, and visit and see, and watch what the kids are doing; we absolutely can learn from them,” said Steve Mascho, Fairlawn Local superintendent. “There are little school districts that do good things in Ohio and we don’t need to be consolidated to become big school districts that may not do a very good job.” 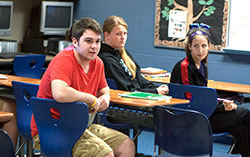 The district launched a one-to-one iPad program in 2012 for students in grades nine to 12. Students can access classwork and information 24/7, rather than be limited by using a traditional computer lab.

“The goal was to get access to resources, technology, data, knowledge and tools into kids’ hands more than we were able to with traditional PCs and laptops,” said Aaron Cox, the district’s director of technology. “We wanted a standard device so it was the same for everyone in every room.”

Students can use their personal iPads or parents can purchase iPads through the district, which also offers a payment plan. Nearly 90% of families bought iPads for their students. The school has iPads for the remaining students to borrow during the school year.

“Parents demonstrated that they were going to invest in their kids’ education,” Cox said. “It’s been very successful.”

The iPads also are used by staff throughout the building. Secretaries, custodians and the head cook have incorporated iPads in their work. Teachers use the technology during peer-to-peer walkthroughs for their federal Race to the Top grant, and students and teachers read daily announcements on them.

The program was so successful that by January 2013, teachers asked for it to be expanded so middle school students could take advantage of the technology. 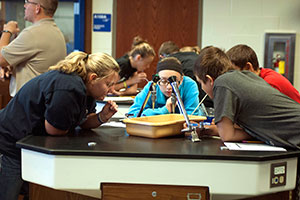 Cox attributes part of the program’s success to teachers’ readiness to embrace the technology.

“If you can get the teachers enthusiastic about it and they know that it’s a tool to help them, it makes everything that much better,” he said.

“We try to get as much grant money and get as many programs in here as possible,” said principal Jo DeMotte. “Poverty is a big issue for us; we’re doing all we can for our kids.” The district has 650 students in K-12 and 36 students in preschool. More than 40% of the students are in the free or reduced-priced lunch program.

The district opened an after-school learning center for students in grades six to 12 with funds from a 21st Century Community Learning Centers grant. The center is open 102 days of the year and includes a summer component. The district also operates a grant-funded after-school program for kindergarten through third-grade students.

“We have the potential to see kids in grades K-three and six-12 every afternoon for additional instruction,” DeMotte said.

“We’re proud of the things our district has done,” said Superintendent Steve Mascho. “This is the second year for the iPad program. We began departmentalization this year, so we have a K-one team and a two-three team that are working with the children so that in the second and third grade, you have the same reading teacher all the time, the same math teacher all the time.

“This is a pre-K-12 building, so kids are intermixed,” he said. “We don’t break down our building. … We’re one big team doing it all.”